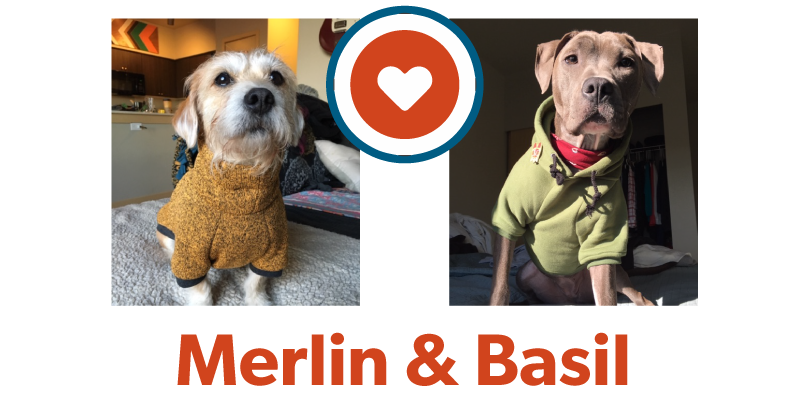 Since the moment I laid eyes on him my heart stopped. His short front legs dangling from the arms of the foster mother who was holding him. He saw me and I lost all sense of doubt when his little tail swayed vigorously back and forth. THIS was my best friend.

After introductions were done, the foster mom handed him over to me to get to know him before making my final decision (even though it had been made minutes ago) his nearly naked, burned body and horribly infected ears caught me by surprise. I promptly asked what had happened to him with a slight tinge in my voice holding back some waterworks, and the foster mom had told me they suspected he had been burned with a chemical substance and left for dead at just 12 weeks of age… I held onto him a little tighter, vowing subconsciously that I would never let him experience pain like that ever again.

Since that moment we laid eyes on each other in the parking lot, all the way to present time, Merlin never ceases to amaze me. At 5 years of age, those short front legs now pounce onto my chest every morning to get me out of bed and start my days as he does —- in the moment and without worry of whatever may come next.

At the time I adopted him, I had been working for a company that allowed us to bring our dogs to work every day, and sit at our desks, needless to say Merlin took to his new role as office mascot very well. There wasn’t a day that went by where we wouldn’t get at the least, 5 visitors a day just to say Hi to him, and most were regulars.  He knew his job was to greet with his famous wagging tail and wet kiss signature move, at lunch we would walk the back trails of the property and he would find his choice pine cone for the afternoon and carry It about 10 steps before tossing the pine cone up into the air only to find it again. This always caught the attention of onlookers and then he presumed his tail wagging, wet kiss role with anyone willing.
Merlin has been by my side every day, since he graciously entered my life and I will never take for granted the impact he has made in the process.

About 2 years into my life with Merlin, he accrued a dad. My significant other who took to Merlin like they had known each other in a previous lifetime… however, now there were two humans to one canine, and it felt like something had been missing.

We casually strolled into a local rescue organization seeing if maybe we would make that connection again, as I did with Merlin, and we did this a few times with a few different visits.  Every single face peering out of each kennel stole a piece of my heart as we walked through the halls lined with homeless pets.  Dogs that had been surrendered for myriads of reasons, cats who were either dumped someplace far from the home or a part of a litter that a been born there in the shelter.  It truly was a lot to take in, and it weighed me down for days.

We decided to try one last time and if It didn’t work out this time around, we agreed to put a hold on our plan and address it later on.

We walked into the rescue, put our names on a waiting list for another tour and patiently waited. After about 10 minutes, a volunteer (whom knew us by name at this point) came out of the backroom entrance and called us over with excitement in her voice. We jumped up, out of our seats and followed her to the back-veterinarian’s exam room where they quarantined new arrivals that came up from southern state, high kill shelters.

When we entered the room, there were two rows of kennels stacked on top of each other, the bottom kennels housed some larger dogs who were pretty worn out from traveling, and the top row seemed empty… until the volunteer pointed to the top left corner. As she went to unlock the kennel door, she told us that when this dog arrived, she immediately thought of us and held her until we were able to see her, “She just arrived last night and is pretty frightened, she was found as a stray and was covered in cuts and scaring” she said. Our eyes widened as we anxiously anticipated what was next.  Out came a 6 pound, grey and white, hazel eyed princess (she more so resembled a large blue potato, but a princess nonetheless)  Trembling from stress and fear, she was handed to my partner and at that moment, he made that connection as I did with Merlin… she unfolded her little legs and wrapped them around each side of his neck, then nuzzled her nose snugly into his beard.  We found our next family member.

We kept her given name ‘Basil’ in appreciation for the shelter staff helping us find our 2nd canine companion, and she has kept us on our toes ever since. Merlin took to her like a big brother would, and showed her kindness, patience and love, despite the fact that she would tumble over him now and again, and chase him all over the house, he knew in time, she would be the one who would protect him and stick with him through thick and thin.

She grew quicker than anticipated and met that growth with equal amounts of sass. I have never known a dog to literally give me ‘side eye’ when I ask her to do something and she doesn’t want to do it, and it makes me laugh every single time. She hates the rain, but plays in the snow until she’s partially frozen, and she insists on helping pre-rinse the dishes while being loaded into the dishwasher.

As I sit here on the sofa, sandwiched between the both of them, sound asleep, I think back on two of the best decisions I have made in my life. Adopting a homeless animal brings its challenges, but it also gives you something you simply cannot replace with anything else in the world.  It humbles you knowing that something as cruel as abonnement, abuse, neglect and pain can be forgiven in mere seconds.  It shows the power that love has on every living being, and how it can evolve someone out of trauma.

When I came to work for NW spay and neuter, I came in with this strong belief that I would be a part of an organization that helps aid those in keeping pet population down. Helping educate those who are unknowing and to be a part of a much larger picture. We are the only voice these animals have–it is our responsibility to keep as many off the streets as possible, and into loving homes. After all, we brought them into this world, and we should show them kindness during their short stay here.