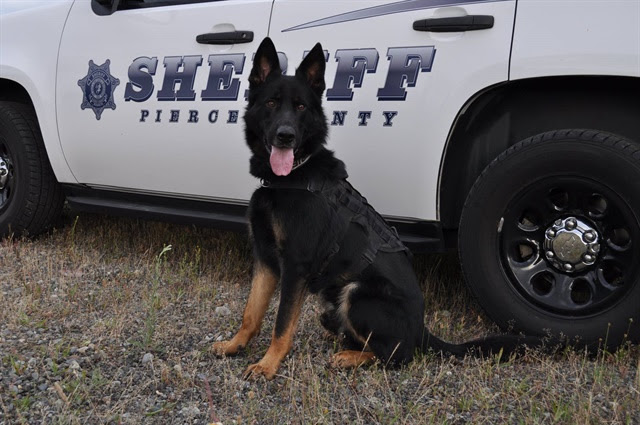 Last month, a very special member of the Pierce County Sheriff’s department, and a familiar snout around Whiskers Wine and Dine, hung up his vest and badge after many years of faithful service to the residents of Pierce County. Our beloved K9 Hanz retired from the Sheriff’s Department after serving for over 6 years on patrol and on the SWAT team.

This big teddy bear was born on November 9, 2011, in Guadalajara, Mexico. K9 Hanz was originally named “Hugo” by his first owner in Mexico, who quickly realized that his drive and intelligence were destined for much bigger things in life. “Hugo” was sent from Mexico to a local breeder/trainer; soon after his arrival in Washington, he joined the department and was partnered with K9 Master Handler Deputy Munson.

Deputy Munson renamed the dog Hanz and provided all of his training to track and capture suspects in Pierce County. K9 Hanz quickly developed into a hardworking, brave, and incredibly focused patrol dog. These skills were perfect for his extra assignment with the SWAT team, where he rode in helicopters and armored vehicles, was deployed along with flash bangs, and pursued after homicide suspects and barricaded individuals. K9 Hanz’s favorite days were SWAT callouts and training days; he believed that our Bearcat armored vehicle was his chariot and the SWAT team members were his brothers. K9 Hanz would literally have to be dragged out of the Bearcat at the end of the day.

K9 Hanz was known around the department for two things – his incredible nose and his constant bark. If he caught scent on a suspect, there was nothing his handler could do or say to divert his attention – he was locked and loaded. And as for his bark, let’s just say that you could hear him coming from a mile away. He barked at everyone and everything, all day every day. His patrol vehicle didn’t need a siren, you could hear K9 Hanz coming from a mile away.

Probably his best capture was in March of 2018, when a homicide occurred in a treehouse encampment in the Orting area. K9 Hanz,

Deputy Munson, and other members of the SWAT team were ferried across a river in pitch black, hiked through the woods to the remote location, and searched the burned up crime scene for the suspect. As they located the victim and cleared the scene, K9 Hanz returned to the river and floated downstream with his partner. As the sun rose, they headed back to shore and made a near vertical climb through a densely forested hillside with K9 Hanz in hot pursuit of the murder suspect. K9 Hanz located the suspect hiding behind a fallen log, the suspect was taken into custody and later convicted of the crime.

If you had the pleasure of meeting K9 Hanz at a school, senior center, Whiskers Wine and Dine, or another community event then you know that he had an incredible ability to go from fearless patrol K9 to super social. He loved to go out to the public and to meet people, and was the star performer at many K9 demos throughout the county.

In January of 2020, K9 Hanz underwent cataract surgery to improve his eyesight. Although the surgery was a success, his handler and the Sheriff’s department made the tough decision to retire him last month in order to prolong his health. Most police K9s work until approximately 8 to 9 years old at the most, and K9 Hanz is genetically pre-dispositioned for a progressive disease of the spinal cord. Don’t worry about Hanz though – we promise that he is doing great and we just want him to enjoy his hard earned retirement to the fullest! He will continue to live with his partner/handler’s family and likely try to claim his rightful spot on one of their couches.

When asked,  Deputy Munson had this to say about how K9 Hanz compared to other K9s in his career. He simply answered: “Top dog. The best I have ever had.”

To our brave and loyal partner Hanz, we say THANK YOU for being the best and for giving Pierce County the best of you. Enjoy your retirement!

Posted in News and Facts